Well once again, Pennsylvania’s forests are a mess – full of litter. Following the annual spectacular display of colors, fallen leaves, twigs, and branches “litter-ly” despoil our forest floors with layers of brown discarded leaves. What a mess! 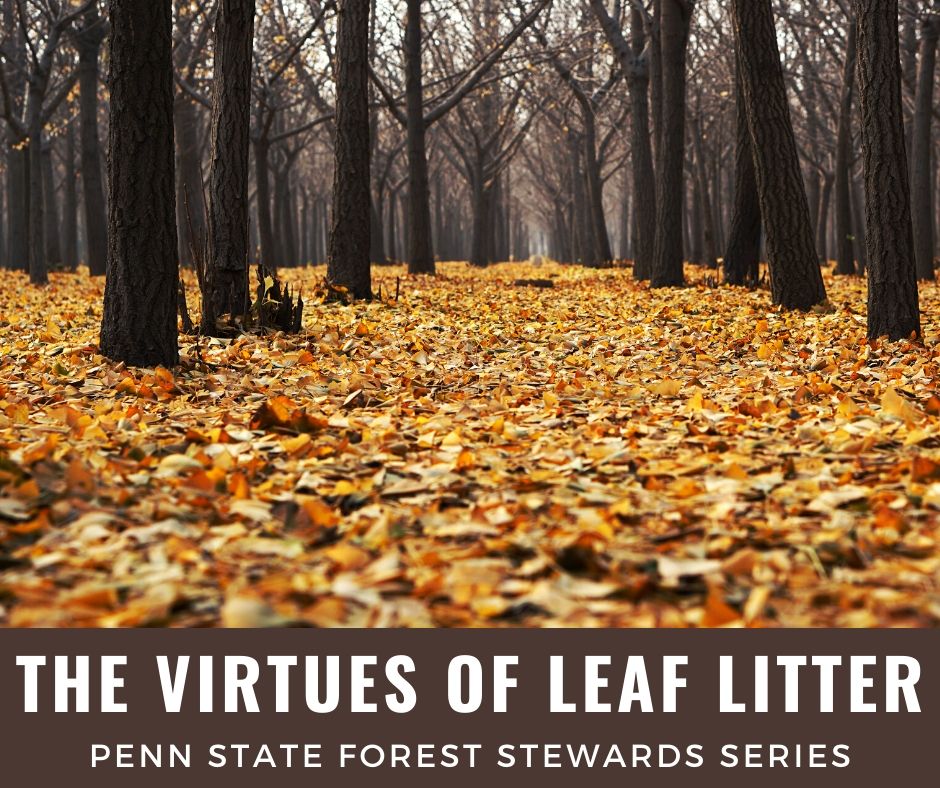 Depending on your awareness of litter’s value and your aesthetic sensibilities it can result in different appreciation levels. If you are a gardener, you would welcome, collect, compost, and hoard tree leaves. If your taste leans toward green grass lawns, you may abhor fallen leaves. Either way, you will likely gather them up; however, there are some who want to leave them in situ and mow them into increasingly smaller pieces to foster quicker decay hoping they will benefit that lawn.

Forests full of fallen leaves are a gift trees give to themselves. No one rakes or mulches them; nonetheless, they do slowly disappear. Estimates are that a mature hardwood forests produce an estimated 2,000 and 3,000 pounds per acre of litter annually. While most of this (about 70%) is leaves, it also contains twigs and branches, which may be partially decomposed prior to falling. It is amazing that through natural decomposition processes, tons of leaves contribute to forest vitality and health in so many ways.

Walking in a forest pay attention to the soil under your feet. You will immediately discern that it feels much different from lawns and agricultural fields. It feels softer, resilient, almost spongy. This is apparent because forest soils are high in organic material, the remnants of years of fallen leaves decomposed and becoming part of the forest soil. As litter break down into their basic building blocks, it results in the release of carbon dioxide, minerals previously captured from soil particles, nitrogen, and other organic and inorganic compounds. Importantly, forests recycle essential building blocks captured from their discarded leaves.

Forest soils, unlike other soils, have a thick O-horizon, which is the organic layer comprised of leaves, decaying twigs and small branches. Those who study and describe soils break the O-horizon into three separate layers:

Freshly fallen and leaves in the L-layer protect soil by lessening the impact of rain drops that would normally dislodge soil particles that, in bare soils, become sediment. This layer is also important for protecting soil pores made by insects, worms, and decaying roots from plugging. In this way, the top layer contributes greatly to the water cycle, allowing water to penetrate forest soils to recharge ground water aquifers, which are important for our water quality and quantity. Rain also starts the decomposition process in earnest as leaves settle or flatten and rainfall leaches mineral elements, mostly nitrogen and potassium. Once leaves are in this state, soil fungi and detrivores – organisms feeding on plant detritus – begin to work their magic. Interestingly, these little appreciated decomposers represent an extremely diverse community of interconnected species. Some studies suggest that fungi are the most important part of this process as they account for up to 75 percent of the decomposition process in this layer and those below.

In the F-Layer, leaf structures become indistinguishable. Scattering recent litter layers exposes the unrecognizable litter pieces. At first, skeletonized leaves showing petioles and veins provide a hint of autumns past. Many factors affect the speed and efficiency of this process such as leaf nutrient content, soil fertility and ph, temperature, moisture, and organic compounds such as lignin. Some leaves (e.g., ash, basswood, tulip poplar, aspen) lose their structure quickly while others (e.g., red and white oak) remain identifiable much longer. Of the variables listed, temperature and moisture seem most important. In some ways, the most productive forest sites have the fastest rates of decomposition.

In the H-Layer plant residues are not recognizable, except for some roots or wood. The material in this layer is fine and mostly non-descript. This layer can interface with or begin to mix with the A-horizon, which is the layer characterized by the mineral components of the soil profile where tree rooting is most evident.

Those leaves you walk on and kick during an autumn walk play an important role as they help to recycle nutrients to support tree and plant growth. They also help build and maintain soil structure to recycle water. And, if you think about it, support important and little understood soil related biodiversity as myriad fungi and detrivores continually break down forest litter.