Thinking more broadly than personal values or needs; Is this winter’s weather a harbinger of a future driven by climate change? If so, how will Pennsylvania’s forests respond? 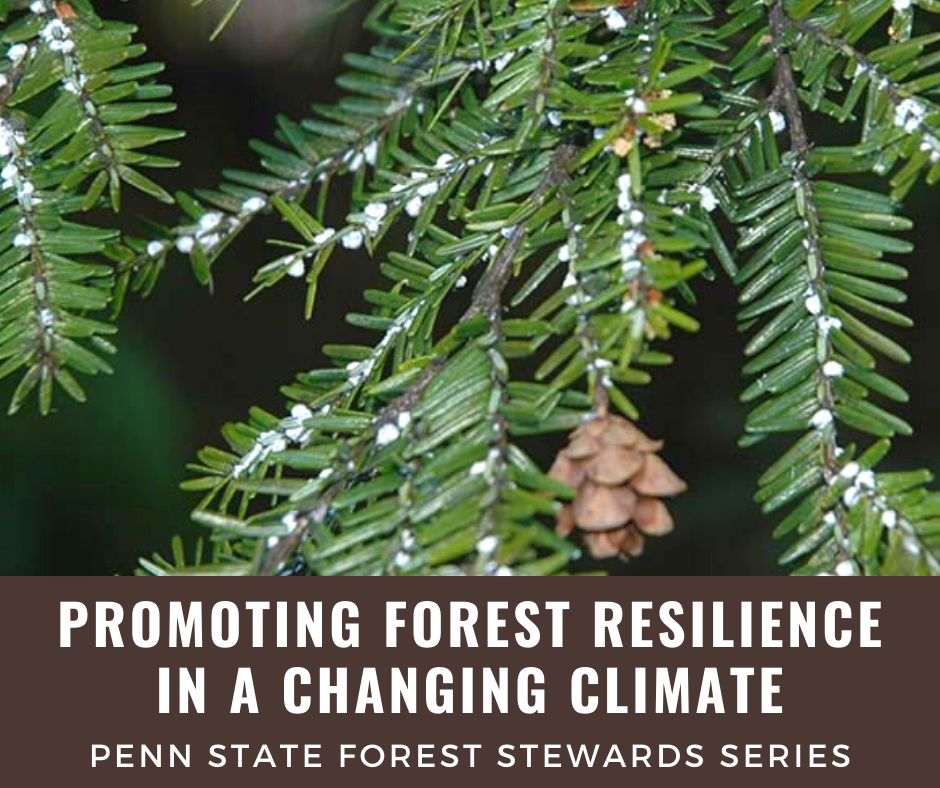 For sure, weather is fickle. Mark Twain purportedly said, “Climate is what we expect, weather is what we get.” It seems something is happening to the climate and, whether you attribute it to human activities or just unexplainable variation, Pennsylvania’s forests are facing challenges.

Forest Resilience in a Changing Climate

Aldo Leopold, a 20th century mid-western conservationist, and author of The Sand County Almanac and many other writings about our relationships to the land and natural systems, was a keen observer of change that others seemed to miss. He wrote, “One of the penalties of an ecological education is that one lives alone in a world of wounds. Much of the damage inflicted on the land is quite invisible to laymen . . . in a community that believes itself well and does not want to be told otherwise.” Simply, he was saying that the more one knows about ecology, the more apparent change is and that many will neither see nor believe that it matters. Many resource professionals as well as laypeople are seeing change in many areas of our environment. As Leopold suggests though, many of these changes and linkages may not be obvious to less than “keen observers.”

Disturbance and change are part of natural systems. Resilience is the ability of a system to recover after disturbance, which determines its ability to persist and function over time. The degree and extent of a disturbance logically affects the capacity of a natural system to recover. For example, in a typical winter, forests often experience damage from wind and ice. Most commonly this is local damage and a few trees experience broken limbs and some trees tip over. The ability of the forest to function across a larger landscape continues unabated – some trees benefit from increased light and growing space from the loss of their neighbors – the forest almost ignores the event.

Loss of Tree Species – and Biodiversity

On the other hand, if the change is larger and more extensive, how resilient is the system? Currently insects are threatening three important tree species in Pennsylvania’s forests – hemlock, ash, and beech. As we lose each of these species, they will leave voids in forest functions. Hemlock, for example, is almost a keystone species in that its disappearance will have deep impacts. Hemlock is an important species associated with high-quality mountain streams where its shade helps maintain cold water fisheries. As hemlock dies, water temperatures will rise affecting insects and trout in many streams. Hemlock also provides important thermal winter cover for many of the state’s birds and animals. Unfortunately, no other native tree species can fill the niche left open by the passing of hemlock.

Pennsylvania has seen the passing of other tree species. Two that come to mind are American chestnut and American elm. Chestnut once was our most common tree. Estimates are that it represented one of every four trees in the state, and its loss led to increases in oak species. It was also an important mast producing species; its loss likely adversely affected many wildlife species. Elm was a picturesque tree that formed a vase-like profile leading to its use in city landscaping. Both are gone.

These cursory examples of tree loss provide a perspective on how the forest has changed. To some observers, the forest does not seem that different; however, it has lost some its resilience – its ability to absorb change and continue to function. With the loss of each tree species, niches open for other species to become more common. What will fill-in behind hemlock, ash, or beech. Experience suggests red maple and black birch will increase in numbers. The forest canopy becomes less diverse and, again, as experience suggests, more susceptible to the next threatening insect, disease, or weather- or climate-related event.

Another example might serve to make this point. Across much of Pennsylvania human and natural disturbance, especially near urban centers, has benefited many non-native invasive plant species. The list is long and includes herbaceous plants (e.g., garlic mustard, Japanese stiltgrass, Japanese knotweed), shrubs (e.g., Japanese barberry, autumn and Russian olive, bush honeysuckle), vines (e.g., oriental bittersweet, Japanese honeysuckle), and trees (e.g., Norway maple, amur maple, tree-of-heaven). Each of these species have ecological advantages as they lack their native home country pests and they are able to exploit open niches based on how they grow and compete. As they become more common, not only do they affect native plants ability to compete, they affect larger environmental systems – fewer insects available that young birds require to fledge, resulting in fewer birds, to feed on native insects later in the season – there are complex and often unknown linkages.

Leopold had something to say about this as well, “The last word in ignorance is the many who says of an animal or plant: ‘what good is it?’ If the land mechanism as a whole is good, then every part is good, whether we understand it or not. If the biota, in the course of eons, has built something we like but do not understand, then who but a fool would discard seemingly useless parts? To keep every cog and wheel is the first precaution of intelligent tinkering.”

As our climate expectations change, the machinery of environment is changing and will change. Without our awareness or understanding, “cogs” in the system are failing and new “gears” are trying to fit into the system we have experienced. Will it continue to work? Take some time to assess our forests and ecosystems and consider how they have and are changing. Learn what you can do to ensure that we leave a healthy environment as part of a legacy to the future.