Listen to “Filmmakers Highlight Plight of Cook Forest’s Iconic Hemlocks,” an interview with Dave & Melissa Rohm, the team behind Wild Excellence Films‘ documentary on Cook Forest, Cathedral: The Fight to Save the Ancient Hemlocks of Cook Forest. Here’s an excerpt:

Interviewer Kara Holsopple: What would it mean to lose the hemlocks in Cook Forest, to the ecosystem there and also to people?

David Rohm: Cook Forest would be a much different place. If you’ve been to Cook Forest, there’s a sheltering ability that these hemlock trees provide. 120-foot trees, you take away even half of them, and you’re going to see a huge difference. There’s a lot of wildlife. Migrating birds love the forest –way up in the canopies, they’re safe there. They reintroduced fishers there not too long ago. It’s like a mink but a little bigger. To people, Cook Forest means a tremendous amount. They get 500,000 visitors a year who aren’t going to visit if it’s not the same forest.

Please visit the Allegheny Front, via this link, for the full interview and audio.

All April three or four of these little birds have been frequenting the suet cake and singing in the forest – heard halfway along Tom’s Run Road on 14 April, and recorded near the Clarion River several days earlier:

For more information on the bird, and additional sounds recordings, visit these pages on Audubon & the Cornell Lab of Ornithology, which provides this fact:

(The suet cage is a napkin holder because some creature of the night carried off the proper ones – the birds think it’s tacky, but they’ve agreed to tolerate it until replacements are obtained.)

During Dark Sky Week, spend a few hours outside in the darkness, admiring the stars and listening for sounds of the night creatures. Or, considering tonight’s Cook Forest forecast, you’d more likely be in the darkness, in the rain.

Even if the night of the new moon is rained out, you can help spread the word about light pollution and the importance of dark skies. Notice how dark your yard is – or isn’t – and talk with friends, family, neighbors, or government representatives about why an unspoiled night environment is crucial for the health of humans and creatures alike. Visit the IDA for more information and resources, or the CFC’s page on dark skies:

This recording was taken 3 April, a rainy Tuesday when River Road was about as quiet as it ever is, in the daytime.  On the recording are: a dozen or so robins, a pair of warblers, a red squirrel or two [long chatter sound].  Automobile sounds, near the end of the clip, come from people getting into a car and preparing to leave, and another car driving east on River Road toward Clarington.  No alterations were made except for volume normalization and trimming of the ends of the clip.

This is the first in a series of recordings to be taken in and around Cook Forest.  Please add our channel on SoundCloud:  https://soundcloud.com/cookforestconservancy/ 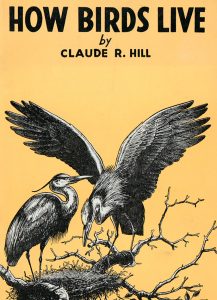 How Birds Live, by Claude R. Hill, 1940 revised printing by American Education Press Inc., is a charming 36-page overview on the workings of the bird world, with pen-and-ink illustrations.

Mr. Hill reprints an interesting technique for sketching birdsong with dashes and curves, the results akin to an avian morse code.  Hill attributes the idea to wildlife artist R. Bruce Horsfall, but, sadly, little can be found online regarding his contributions to song sketching. 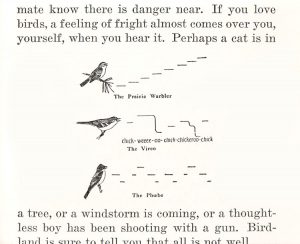 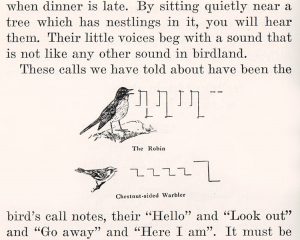 How Birds Live is an endearing and succinct introduction to bird biology and behaviour, and should engage any young naturalist.  Hill illustrates some of the ways birds benefit people, e.g by eating mosquitoes and crop-damaging insects and rodents – one pair of barn owls ate more than 2,000 mice in a summer.  He also explains how birds evolve to suit their métier: by having webbed feet or hunting talons, and downy feathers for warmth and stealth or strong, sleek feathers for flight. 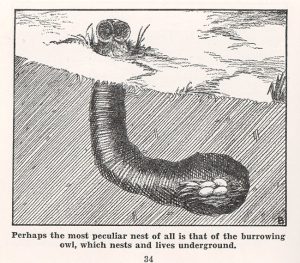 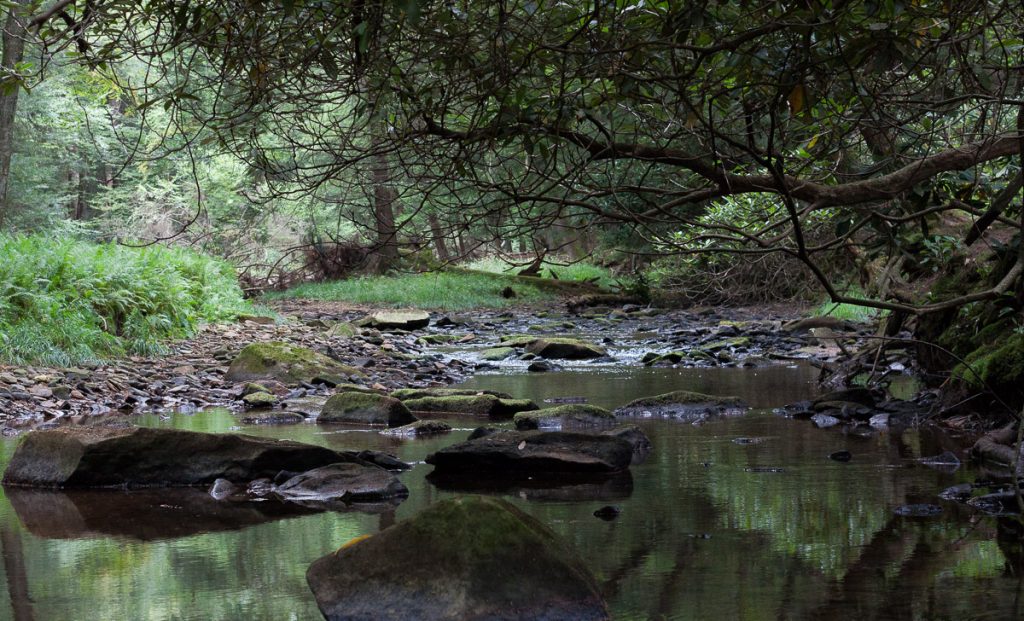 As named by the Pennsylvania Parks & Forests Foundation, a 501(c)(3) affiliated with the DER/DCNR, Cook Forest is the Park of 2018:

Fighting for the survival and protection of Pennsylvania’s old growth hemlocks.

This is taken from an email sent by PPFF on 19 January, and to date no further information has been found.  You can view the complete message, including all the other designees, here:  http://bit.do/PPFF2018awards.

Any additional news regarding this designation will be posted as available.  In the mean time, please take a moment to tell us what you love most about the forest, and what you think we should focus on this coming year:  Submit a Survey!

For those who enjoy celebrating obscure and slightly silly holidays: 21 January is Squirrel Appreciation Day.  Cook Forest has a fair number of squirrels — including chipmunks, which are ground squirrels — but the squirrels of the year at CFC are the southern flying squirrels:

These fellows are tiny (~ 2 oz), nocturnal (look at those eyes!), and fearless leapers – flying squirrels glide, rather than fly, using the furred membranes between their front and rear legs on each side, called the patagium.  Though they primarily leap among trees in a stand, they’ve been recorded gliding as far as 295 feet, which is nearly 98.5 yards, which is nearly a football field’s length – and they do it at speeds between 10 and 30 mph.

They’re predominately active at night and spend very little time on the ground, so many folks never see these fellows.  Despite a small disparity in size and coloration, it’s quite difficult to tell the southern from the northern flying squirrel, which is endangered in Pennsylvania.  Since the Cook Forest flying squirrels had pups (or “kits”) in the autumn, we know they’re the southern variety, as only the southern squirrel has two small litters annually.  Sugar gliders look similar, but are a different animal altogether.

Flying squirrels are among the only communal squirrels – as many as 30 have been found living in a single drey, since the’re so small they need to nest together to share body heat. Flying squirrels don’t hibernate, but they often become less active during colder weather.

Fun fact: if you find a nest in your attic, you’ve got a “scurry of squirrels!”  Lucky you!

Some of us are in the same boat:

This is not his natural or his normal habitat, but he and his siblings won’t be evicted into custom-built three-tier tree-hung condos until spring.  If you’ve got a similar problem, please contact the CFC and we’ll happily share any advice or information.

The CFC has lately obtained its 501(c)(3) charitable organization status, and is now working on the website and our initial park programs. Please help us out by taking a minute to let us know what’s most important to you — we’ve created a quick survey we’d very much appreciate your taking the time to submit:

[via SurveyMonkey – the link will open in new tab]

Let us know what brings you here, what you’d like to see for the Park’s future, and how we can improve. 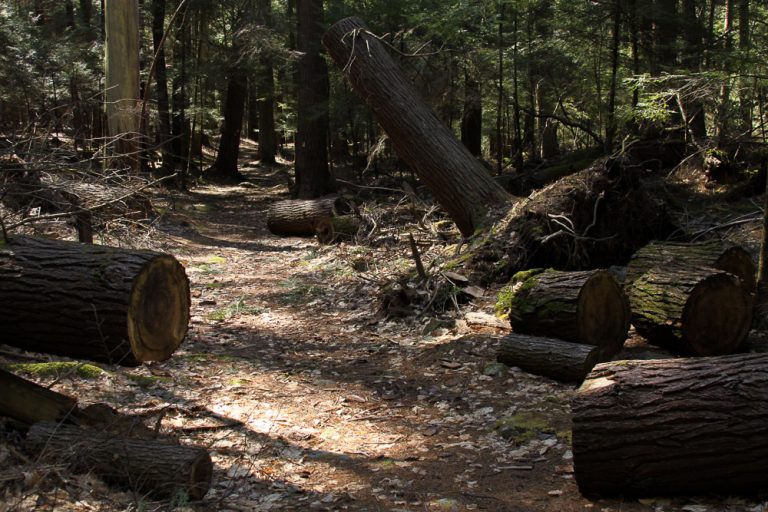 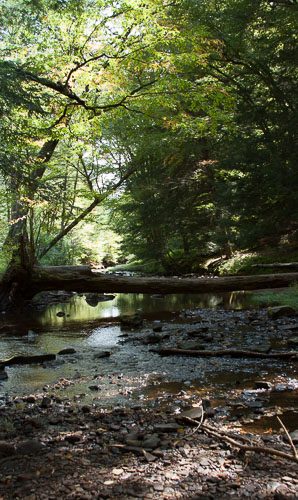 Hello!  Welcome to the blog of the Cook Forest Conservancy.  We’re just starting out, and we’ve decided to keep things interesting by posting not only current news and events, but also mini-articles about flora and fauna and other things you might see in the forest.  The best way to navigate topics is the search bar, or the tags that should appear below [most] posts, which will bring up similar entries and more things to learn.

The CFC does have a facebook page for posting & re-posting events and articles, and a twitter for similar, but please also  subscribe to our email newsletter list, which should be coming out in the [semi-]near future.  We promise to keep volume light, you can opt out any time, and the CFC will never sell or trade your contact information:

Thank you for Visiting!

In addition to current events and timely articles, this “news” page is meant to serve as an archive of information on all things forest — flora & fauna posts, camping & hiking tips, etc.  Whatever you’d like to learn or remember, please browse using the tags, or search.

Happy #givingtuesday from Cook Forest on this love

We're thankful for our favorite trees, and for the

Happy National Take a Hike Day! Cook Forest had a

Fungi Friday in Cook Forest! these were all on one

Happy Halloween from Shagbark Jones and the CFC! O