Oaks are economically important tree species in Pennsylvania and across the East. Acorns, or mast – a word derived from old English which means “forest food,” are important to wildlife. Oak-borne mast production varies from year to year. Much research has sought to predict masting years, when big acorn crops occur, and shed light on what leads to poor years – or early acorn abscission (detachment) – like you may have seen this season. 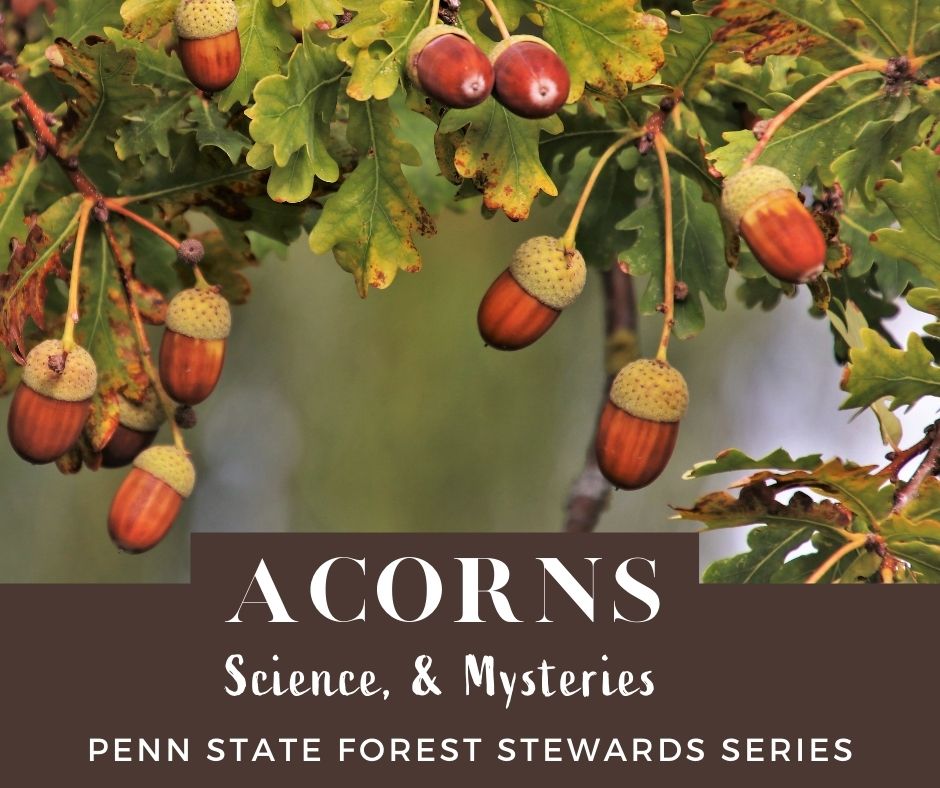 Oaks separate into two groups, popularly referred to as red and white, and learning to identify the difference between the two groups is easy.

Red oaks – e.g. Northern red oak, pin oak, scarlet oak, and black oak – have small “bristles” on the lobes and tips of their leaves. White oaks – e.g. white oak and rock, or chestnut, oak – lack these bristles, and have rounded leaf lobes.  (CFC note: the image above is of a white oak.)  There are other differences that are more difficult to recognize, such as acorn structure and wood anatomy.

The Process of Creating an Acorn –
and the Trials of 2020

Both red and white oaks produce female and male flowers on the same tree, unlike ash which has male and female trees. The process of producing an acorn starts late in the growing year when the male flowers form as the tree’s growth slows toward the end of summer. That is the end of the first year (year 1) in the process. Then, in the second year (year 2), as the tree comes out of dormancy, female flowers form in the axil of the leaf stem and the twig and remain dormant. As the spring leaves begin to unfold, the male flowers emerge and are very apparent as rather-long, drooping, greenish-yellow catkins. These appear about two weeks before the much smaller female flowers emerge.

For the white oaks, as the male and female flowers emerge in year 2 as described above, pollination and fertilization should happen. The pollen from the male flower, which is wind-disseminated, lands on the style, which is part of the female flower. When this happens, the pollen initiates the development of a pollen tube that transfers male cells into the ovule to complete fertilization and the process of acorn formation should start in earnest. For this to happen, it is ideal to have warm days and cool nights.

If temperatures are not right, fertilization may fail, and the female flowers will abort, which results in low acorn initiation. Alternatively, if temperatures become too hot or drought conditions occur, white oak acorns may abort, which is likely apparent in mid-June to mid- to late-July; perhaps that is the reason for reported early acorn drop this year. The other big threat to white oak acorns is late spring frosts, which also happened this year, and would again remove the fertilized flowers.

Happy #givingtuesday from Cook Forest on this love

We're thankful for our favorite trees, and for the

Happy National Take a Hike Day! Cook Forest had a

Fungi Friday in Cook Forest! these were all on one

Happy Halloween from Shagbark Jones and the CFC! O